What is a Quest?

For the last 7 years I’ve been running my business The Suitcase Entrepreneur from all over the world, while living out of the suitcase and going on adventures.

Yup, that’s right. I am quitting.

I am taking a business sabbatical from my own business and instead I am taking YOU on a Quest for Freedom.  Your freedom.  I’m so freakin excited to do this.

To understand why the heck I am, here’s a bit of backstory into me. This is actually taken from my TEDx talk last year called ‘The Surprising Truth About Freedom’ (feel free to just watch from 12:12-15:44).

Why tune into this podcast?

After watching, I hope you can understand why I’ve named this podcast Natalie Sisson’s Quest for Freedom, because as I mentioned, I’m on a hunt to understand what freedom really is.

This podcast is part audio journal, part narrative and part ‘choose your own adventure’.

It will be divided into Seasons (just like on TV) and each season will be a different quest around freedom. I’m starting with Personal freedom, and I’ll break that down more in Episode 2.

What is the definition of Freedom?

First off let’s attempt to better understand freedom (or maybe expose why this is no ordinary quest I’m going on).

Over the years I’ve asked a LOT of people what their definition of personal freedom is and I am starting to see a pattern in their answers.

A couple of Friday’s ago I was having dinner with friends and new acquaintances, listening to music and discussing all sorts of topics. So I decided to whip out my new Zoom H6 recorder and ask them a question for my new podcast.

They all agreed, so without any background I just launched into my question which I posed to them which was: “What’s your definition of freedom?”

Here’s what they had to say:

“Freedom for me is abundance but it’s conditional on the freedom of others. I am not free if other people aren’t free.”

“There are a lot of different types of freedom, but the most important freedom is the freedom from our own minds, and that if freedom is dependent on external factors then it’s not truly free.”

“I believe that the only thing that we are actually in control of is how we react in the moment and having an internal sense of freedom to be able to react as we choose is the ultimate freedom.”

“Choice. You just get to choose freely whether it’d be a monetary thing or just your thoughts or your reactions.”

“Free is something that doesn’t cost anything”

Do any of those resonate with you? I go on to say in my podcast:

“There’s also a price to pay for too much freedom. I feel like I experienced that a few weeks ago when I was trying to make a big decision in my life, and I realized I was so free in choosing either one, that I almost felt paralyzed for the first time. There was too much freedom. You have to have some boundaries and some limits within which to feel free.”

So as you can see from this discussion…..I’m really no closer to uncovering a definition for freedom.

Perhaps this whole quest is going to impossible, but I can’t wait either way because this is a year like no other.

I’m firing myself and taking a business sabbatical to become a student of life, and go on a quest to find freedom.

What is a Quest?

Now that we’ve established the challenge in defining freedom, I thought understanding what a quest is would be a logical next move. So back to my friends for their ideas around this:

“It’s like bigger than yourself. There will be obstacles, there will be doubt, there will be naysayers, there will be almost insurmountable odds but your values and what’s inside of you pull you forward beyond what you think is possible and achieving your quest will be one of the greatest memories for a parts of your life.”

“A quest is fundamentally a search for meaning. It’s about trying to find and discover meaning.”

“Is quest the root of question?”

And yes is the answer to that question. I looked it up on the interwebs to find it is from late Middle English: from Old French queste (noun), based on Latin quaerere ‘ask, seek’.

According to the dictionary, because all intrepid people going on a quest would of course refer to a dictionary first right….. a quest is both a noun and a verb.

That sounds really freaking fun doesn’t it… long and arduous? Ah no thanks.
The verb came up with much better results in my opinion

That all sounds much better. But if you ever hear me saying “My eyes quested to the left and right” I’ve either lost the plot or I’m exploring a medieval festival and getting in character.

According to Wikipedia a quest serves as a plot device in mythology and fiction: a difficult journey towards a goal, often symbolic or allegorical.

Tales of quests figure prominently in the folklore of every nation and ethnic culture…. The moral of a quest tale often centers on the changed character of the hero.

So I guess for the purposes of Natalie Sisson’s Quest for Freedom podcast…. I’m the hero? Which also means I’m the one who has to go through the good, the bad and the ugly.

I am a walking, talking human experiment, so that you can sit back in your armchair at home, or on your drive to the city, or while you’re enjoying a relaxing pedicure, and listen to me do all the hard stuff, the grueling, intense, exciting, thrilling, daring and at times, prob mundane things I need to do to achieve on this Quest for Freedom.

And I’m ok with that. You know. I’ll take it on the chin.

Partly because it’s my idea and all so I have no excuse to complain. And partly cos I kind of like the idea of being the guinea pig.

First things first I feel like you guys need to give me an appropriate mythological made up Hero’s name.

Do me a favor and humour me.

Leave a comment below with your idea for my ‘hero’ name. I’ll choose the best one, and for season one will henceforth call myself that name and you’ll get your name in the credits.

My favourite definition of a quest, because I found it so fitting, was from Vocabulary.com

Ha. That’s one heck of a definition. They go on to say:

Knights in the Middle Ages were forever taking on quests––most famously to find the Holy Grail. In modern times, you can quest without ever leaving home, thanks to the Internet.

A scientist might embark on a quest to find the cure for cancer. A detective might quest for the truth. It’s worthwhile noting here that quest is also a verb that means bark with prolonged noises, of dogs. Perhaps something I can incorporate into the show?

Unintentionally I chose this word because it sounds grandiose, but in a good ol down to earth way. And probably because as a kid I loved Greek Mythology and read books like Odysseus, or Ulysses, depending on which side you gun for more. Same hero. Same quest. Different name.

Unbeknownst to me however is the Quest is one of 7 Types of Story Plots you can use when writing, or making a movie!

According to Liz Bureman over at The Write Practice:

“The Quest is a search for a place, item, or person that requires the hero to leave home in order to find it. Sometimes the item is just a MacGuffin to drive the plot along.

I’m going to pause to explain here, as I had no idea what a MacGuffin was, but if you’re a fan of Raiders of the Lost Ark, it’s the thing the hero needs to find on their journey to get to the real important thing. So in this case the golden monkey head Harrison Ford finds in the tomb, not the actual ark.

“Other times the thing driving the quest is specific to the story’s circumstances. Either way, the hero is leaving home to find whatever the heck the story demands, and we get to come along for the ride.”

Sounds fair to me. You game to come on this ride with me? You’re not going to leave me all alone out here are you?

Ok here’s where Liz got me thinking. She went on to describe the characters in a quest and I realized I’m going to need a crew. You see a quest is the plot type most likely to have a group of main characters rather than one protagonist in the main eye of the story.

Shiiiiittt and here I was thinking this was ALL about me! Nope apparently not.

According to Liz I should have:

So I guess before the next episode I need to find some of these characters to make this more enticing right?

Ok I’ll be back in the next episode with some characters, I can’t guarantee they’ll fit the bill but heck, this is my quest so I get to choose them.

It may even be you if you play your cards right!

Whereever you’re tuning in or reading this from around the world, I’m sending you a BIG virtual hug of thanks and gratitude for tuning into to the very first Season and Episode of Natalie Sisson’s Quest for Freedom.

If you want to make my day leave a comment below to:

Go ahead and make sure you subscribe to the show in any podcast player you have, and find me on iTunes, Stitcher, SoundCloud, Google Play and iHeartRadio.

Tune in to the next episode where I let an Oracle tell me what I can expect in 2017….

Yep I consulted an Oracle…or more over the Suburban Psychic approached me to do a session with me. And here’s just a snippet of what she had to say:

“There’s a part of you that doesn’t want to know stuff, and there’s that little part of you that is giving permission to you to dive in deeper, to explore further, because you got this amazing watch dog in the ego.

If a wave is crashing, coming towards you you don’t try to get over the top and scoot your way around it. You got to dive into that sucker and that’s the only way you are going to come out the other side without being thrown on your head and getting sand in places that you don’t want to even talk about ”

Intrigued? Make sure you jump in and sign up to updates via email so I can share with you when each episode goes live.

Get the latest blog post and episode delivered straight to your inbox. 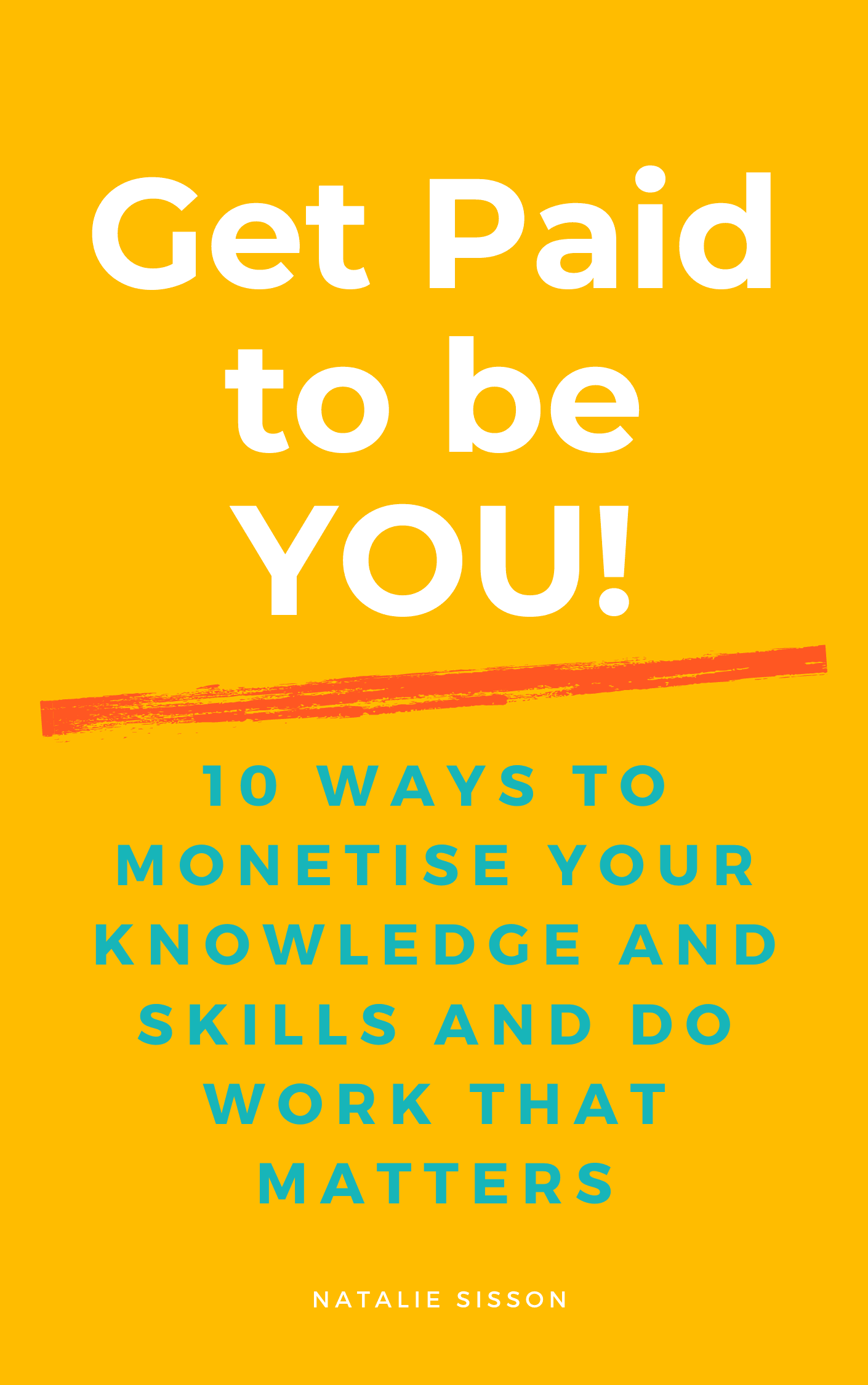 Want to build a kick ass business that lets you create the income and impact you desire? Then download my 'Get Paid to Be YOU' Guide to learn 10 ways to monetize your skills and knowledge and do the work that matters today!

EPS 83: Reinvent Your Mid-Life and Turn It Into a New Career With Juju Hook